This FAQ outlines the different features brought in by the differing versions of Swivel. Some releases contain some bug fixes and these are not generally listed below. Unless there is a specific requirement, an upgrade would usually be made to the latest version. To find your version see Version Information.

The Swivel software is only provided as part of an appliance installation. Direct software installation on a Windows or Linux server is not supported by Swivel as a production deployment environment.

For Sales or technical help with an appliance please contact sales@swivesecure.com

For information on receiving details of new versions and news see Contact Details.

When upgrading Swivel on virtual or hardware appliances do not use these files unless directed by suppport, instead see Patch Swivel Install. Swivel updates for appliances are contained within patch files, for information on specific patch versions see Appliance Swivel Core Patch File Verions FAQ.

For information on upgrading Swivel on virtual or hardware appliances see Patch Swivel Install or for software only see Upgrade PINsafe. To find your version see Appliance Versions FAQ. 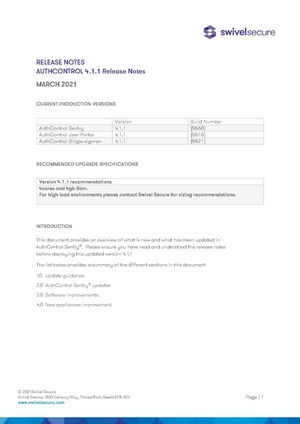 Note: A new licence key will be required to run the new features that have been rolled out in June 2016 To request a new licence key please go to https://supportdesk.swivelsecure.com and create a new ticket, quoting the name that your current licence is issued in.

For more details on the changes, please see the release notes

Due to a typographical error, authentication to the SMTP server was never applied in versions 3.10.6 and 3.11.2. This has now been corrected.

SMTP connection pooling was introduced in versions 3.10.6 and 3.11.2. Unfortunately, the default settings meant that connections in the pool could expire and so SMTP messages fail. In this version, 3 new options were added:

It was found that deleting several Agents could cause the Agents configuration screen to crash, although the Agents were deleted. Restarting Tomcat fixed this problem, but this is not convenient. This release fixes this problem.

The feature that allows users not in the Swivel database to authenticate through RADIUS using repository password only only worked if the username used to authenticate to the repository was the primary username for the repository. In other words, the attribute for authenticating unknown users, set in the NAS, was not used. There was a workaround: to create an Agent with exactly the same name as the NAS and set the attribute on that. However, when checking unknown users, RADIUS authentication now correctly checks the NAS username attribute, rather than the Agent attribute.

The API call to reset PIN using a confirmation code now takes an additional option to specify whether or not the user’s Swivel password should also be reset. Previously, if the user had a Swivel password, it would always be reset along with the PIN. Now, it is possible to reset just the PIN. As this is an API call, it requires that client applications, such as the User Portal, should be updated to support this option.

Version 3.11.2 supports both the previous and new licencing method. Customers on versions 3.10.5 or below do not need to update their licence immediately unless Sentry is being added to the licence. Version 3.11.2 also includes the changes in 3.10.6.

Version 3.11 requires a different licence key to previous versions, please ensure you obtain a 3.11 licence key before updating any production instances. However, 3.11.2 onwards supports both licences

This is a new full release, but because of the requirement for a new licence key upgrades will require you to contact Swivel prior to completing the upgrade.

NOTE: version 3.10.6 is later than version 3.11, but does not include support for the new licence format.

NOTE: this build fixes the following issues found in the original release of 3.9.6 (build 896)

Recent changes have given more control over which helpdesk users can manage which other users. However, in doing this, we removed the ability for helpdesk users to manage other helpdesk accounts. A number of customers have objected to this restriction, so version 3.10.1 made it possible to re-enable this feature. This patch is provided for 3.9.6, for customers who prefer not to upgrade. Note that this patch should only be applied to an appliance that already has version 3.9.6 installed. As it is an appliance patch, it must be applied using the method described in Patch Management.

Note that this update does not immediately re-enable the ability for helpdesk users to manage other helpdesk users. Rather, it allows administrators to decide whether or not this feature should be permitted. To change helpdesk rights in the Administration Console, go to Repository -> Groups and click the Group Rights button. See the documentation on that page for more information.

War file only for stand-alone installation.

For more details on the additional attributes feature, see here.

There is a known issue with this version only: every time a user sync is run, it generates a file in the logs folder (/usr/local/tomcat/webapps/pinsafe/WEB-INF/logs on an appliance) with a name beginning with "profile". These files can safely be deleted, as they are for diagnostic purposes only, and were not intended for production.

NOTE: config.xml cannot be copied from Swivel versions earlier than 3.2. Information must be entered manually