Users in the Swivel database can come from a number of sources. We refer to these as user repositories. Each user belongs to exactly one repository, and in order to import users from a repository, the repository details must be entered.

Currently, we support the following types of repository:

Repositories can be read-only or writeable:

Additionally, there are Agent repositories. Any Agent can be configured to act as a repository, in which case, users can be created, modified and deleted within the Swivel database using API calls. Agent repositories can be defined on top of other repository types, by giving them exactly the same name, but beware that running a User Sync on a repository will overwrite any changes made by the Agent.

The different repository types will be described in more detail later on, as we get to the settings menus.

Repositories can also be used to authenticate users' passwords. This is typically done for LDAP repositories, but XML and Database repositories are also supported.

On this page you define the repositories that will be used from this Swivel server to import users. It is not necessary to define every repository on every Swivel server in a HA solution, if you do not intend to synchronize them from this server, or authenticate user passwords.

In addition to the list of repository servers, there are the following settings:

This page is provided largely for information. It lists the available repository types. In theory, it is possible to add new repository types to this menu, but you would need to create new Java classes that implement the Swivel Repository interfaces.

Groups are used within Swivel to manage user rights, messaging and other features. A Swivel group can include users from multiple repositories, and each user can be a member of multiple groups. However, if a user is a member of more than one group that is used for messaging, and the message transports conflict, results can be unpredictable, so this is not recommended.

This page maps repository groups to Swivel groups, and assigns rights to each group.

The rights that can be assigned to each group are:

As well as the usual Apply and Reset buttons, this page also has a Group Rights button. This provides access to the Group Rights page, which is described below. 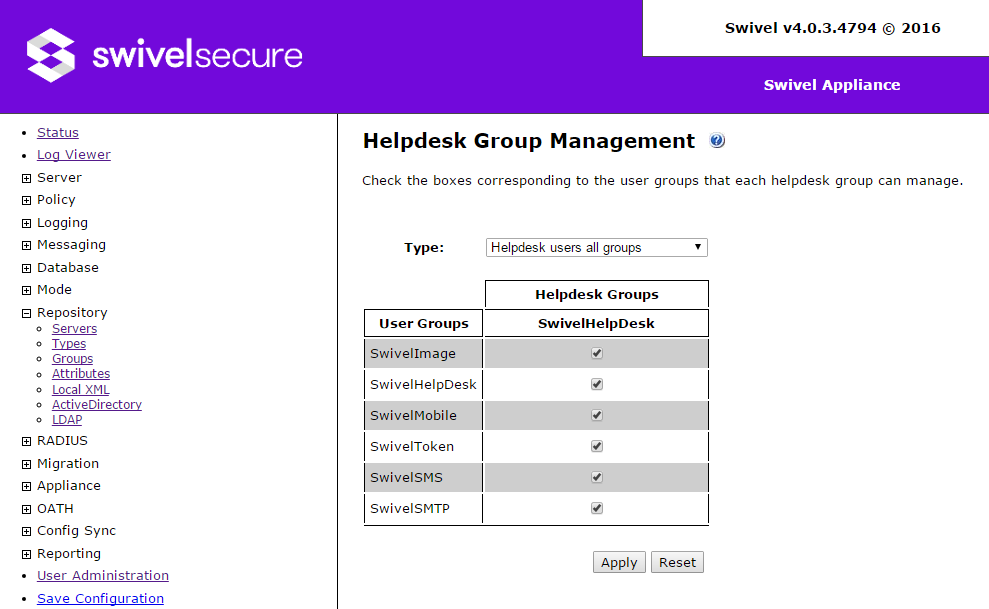 There are 4 options listed in the Type drop-down:

The screen above shows just one helpdesk group, but if there are multiple groups with helpdesk rights, all helpdesk groups will be listed along the top in the column headers. All groups, except for those with administrator rights, are listed in the row headers on the left. Put a check in each cell if you want the helpdesk group at the top of the column to be allowed to manage users in the group to the left of the row, and leave the cell blank if you don't.

You will notice, if you select a type other than Helpdesk groups as below, that the check marks are automatically altered to match the chosen option: 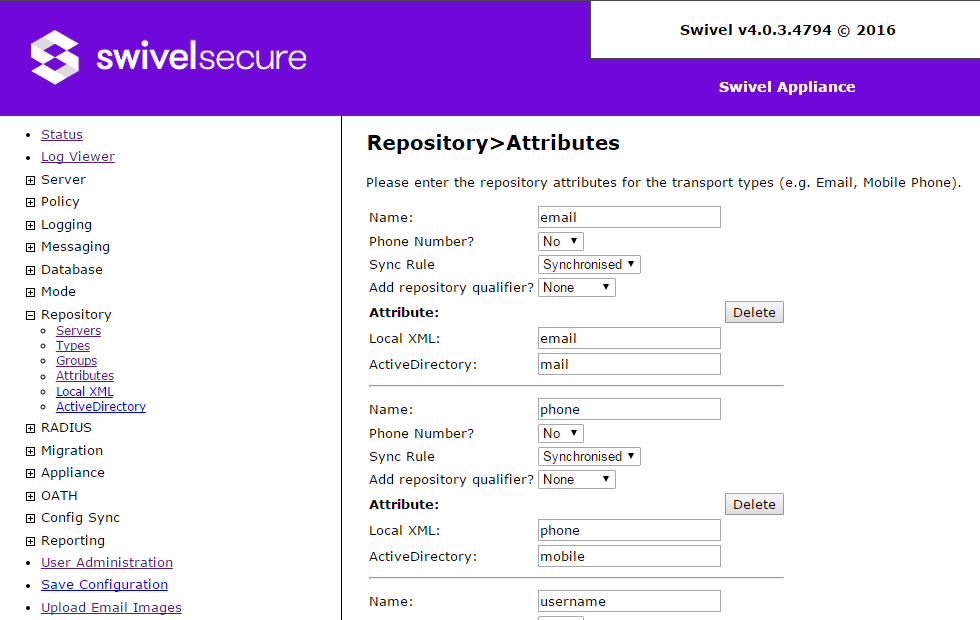 Swivel has the ability to store additional attributes against each user. These attributes can be used for the following purposes:

This page allows you to define the attributes that are used, and how they are read from the repositories. A standard list of common attributes is provided initially, which can be modified as needed.

Each attribute has the following settings: 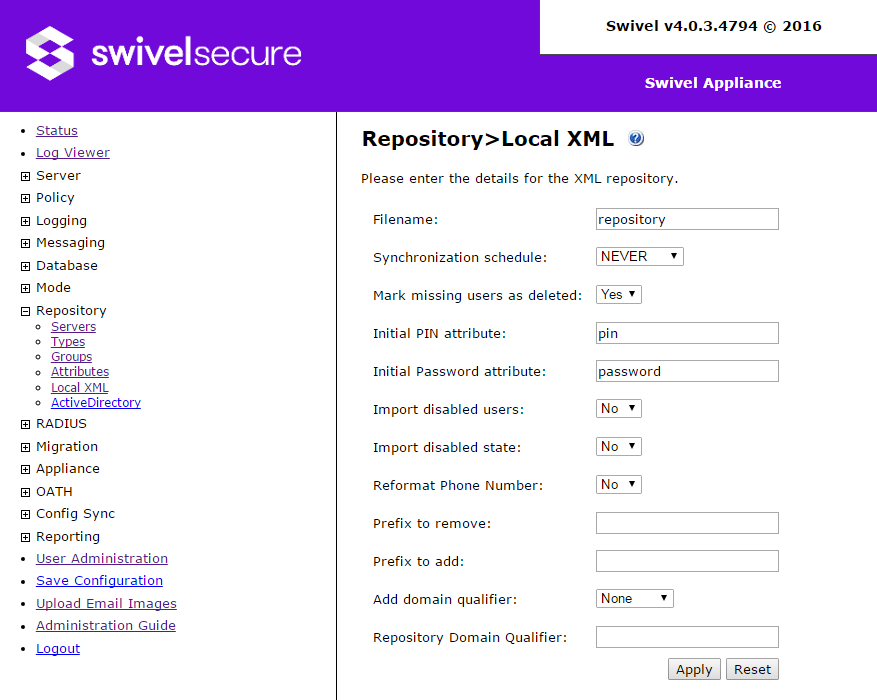 There are two typical scenarios:

One thing to be aware of, for a HA environment, is that the XML file is not replicated over multiple servers. Therefore, if you want to maintain an XML repository over multiple servers, you must add users to every instance, or else manually copy the XML file to each server. Another solution that has been used is to have a different XML repository on each server, with different users. Be aware, however, that although XML repository users from one server cannot be managed on another server, they still exist on the other server, and have the same rights.

The following settings apply to XML repositories. All but the first are common to all repositories, and will not be described again in this document.

A Note on Attributes in XML Repositories

The XML repository uses a fixed schema for the XML file. This means that only certain values can be used as attribute names. These are 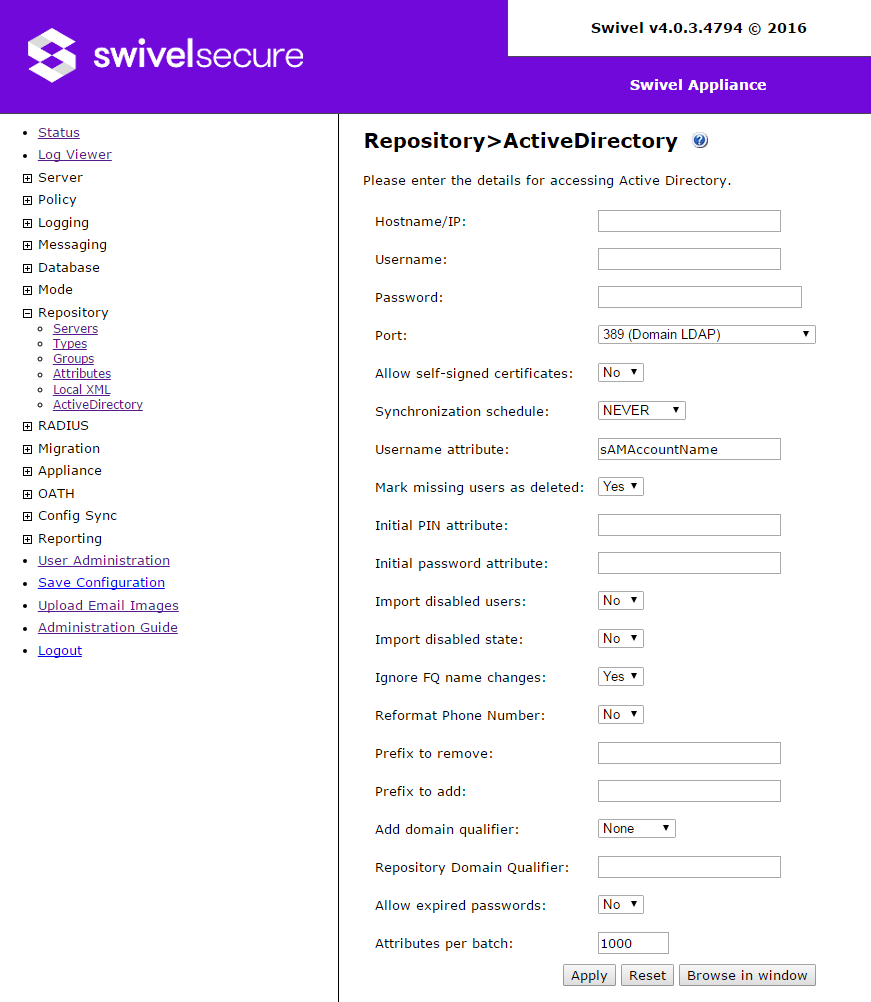 This is the most commonly-used repository type. It allows the importing of user details from a Microsoft Windows Active Directory instance.

Active Directory has many of the same configurable options as an XML repository. It has the following additional options. 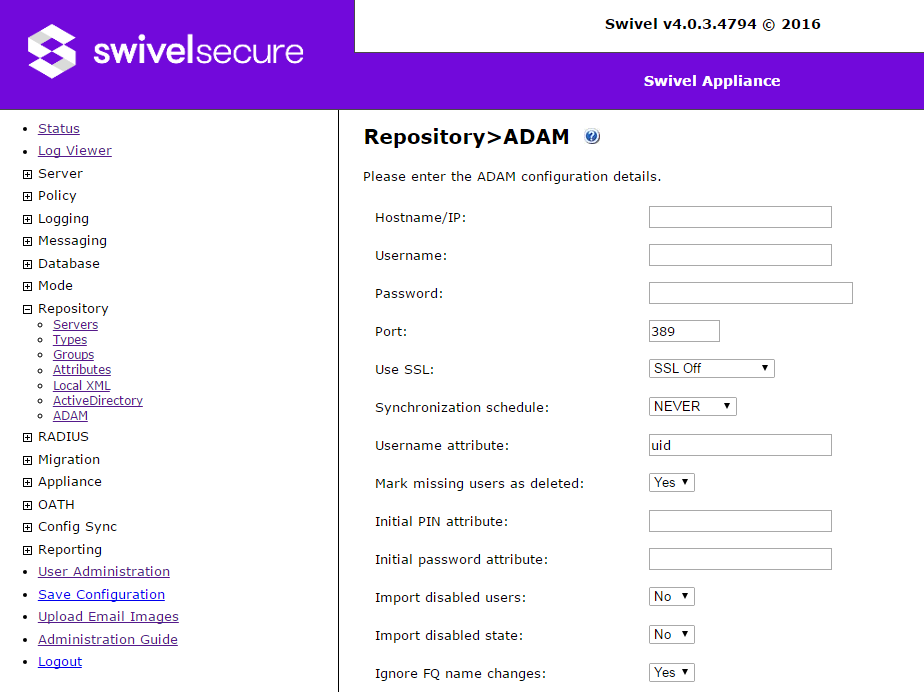 An ADAM repository is very similar to Active Directory, with the additional ability of being able to create new users and modify existing ones directly in the Swivel admin console. Additional options here support that ability. 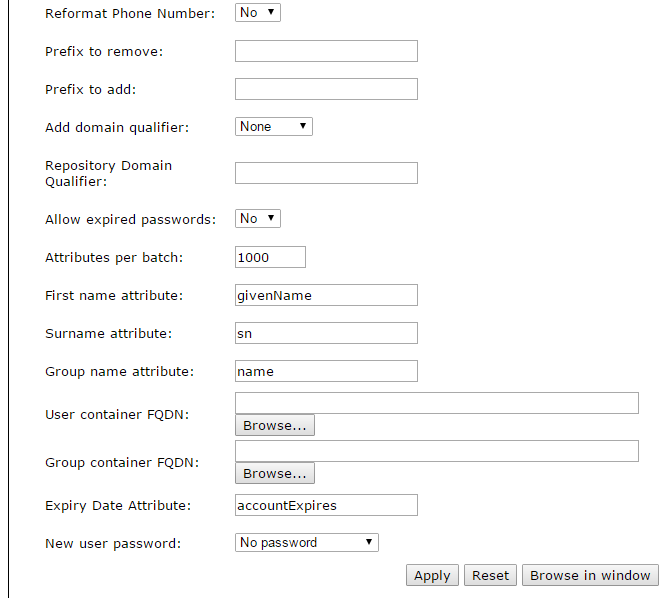 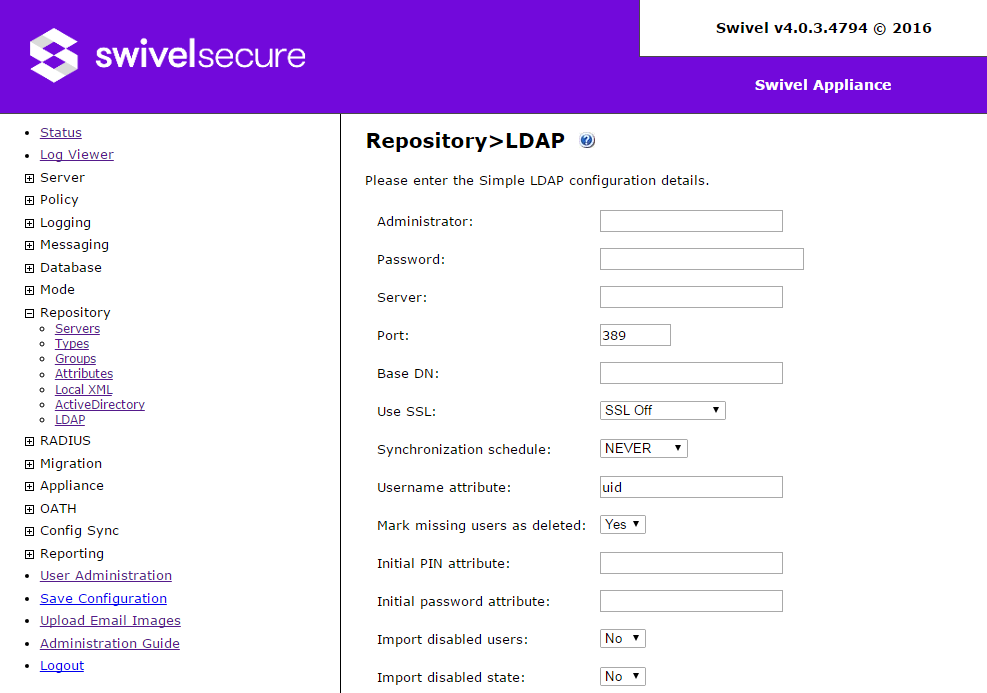 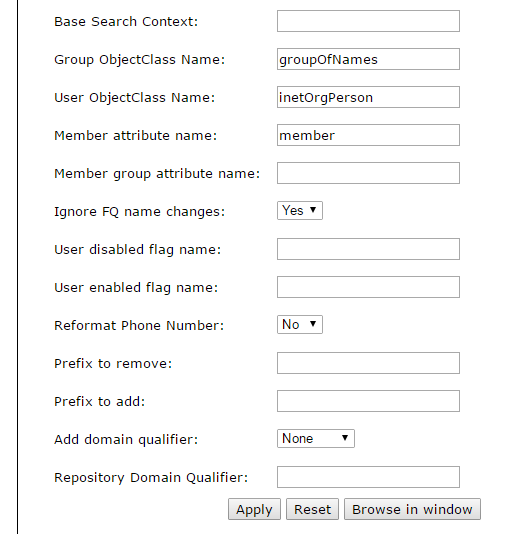 A Simple LDAP repository has the same configurable items as an Active Directory repository but with the following additions: 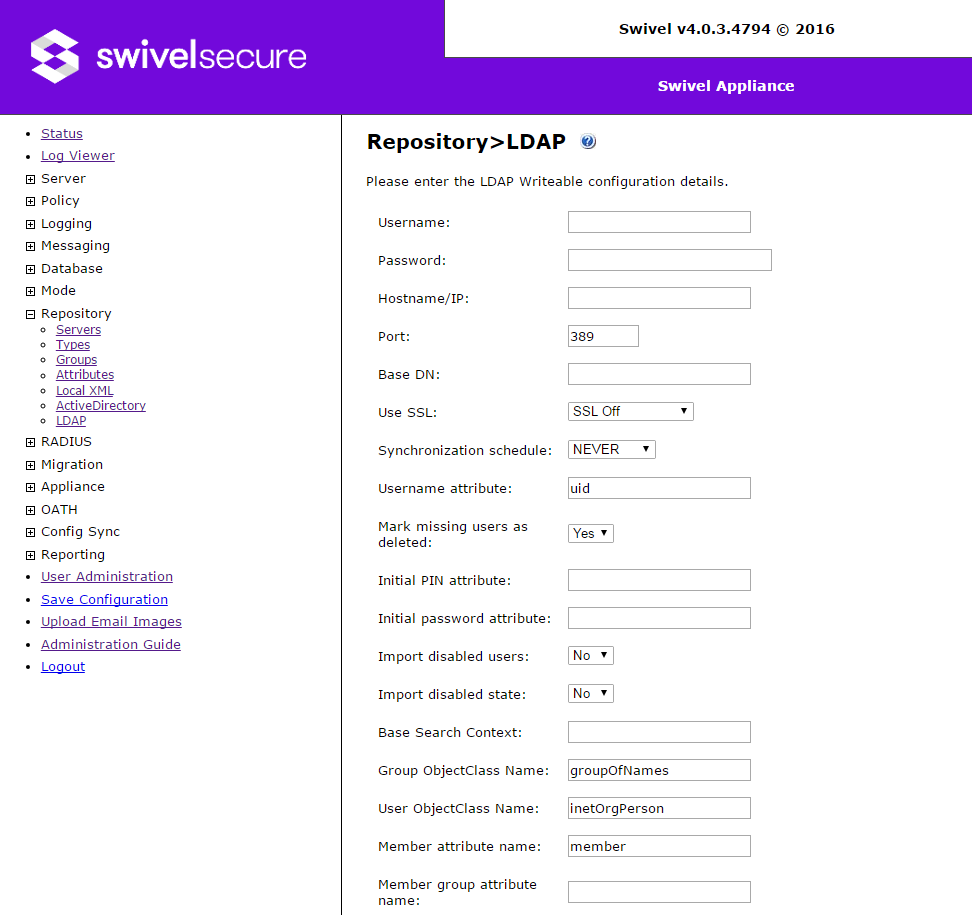 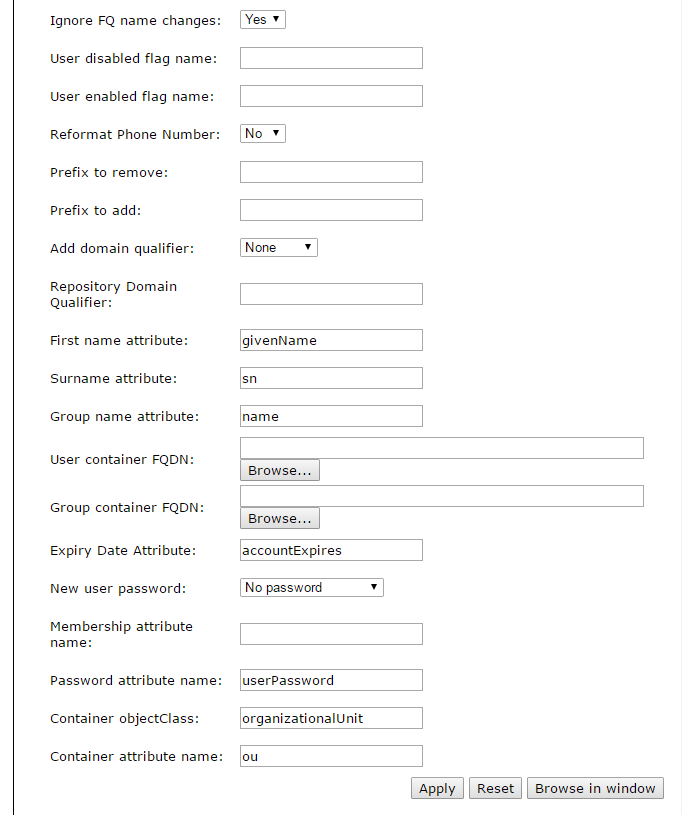 This type of repository is a writeable version of Simple LDAP. As such, it has the configuration items of Simple LDAP, plus some others in common with ADAM, and the following additions: 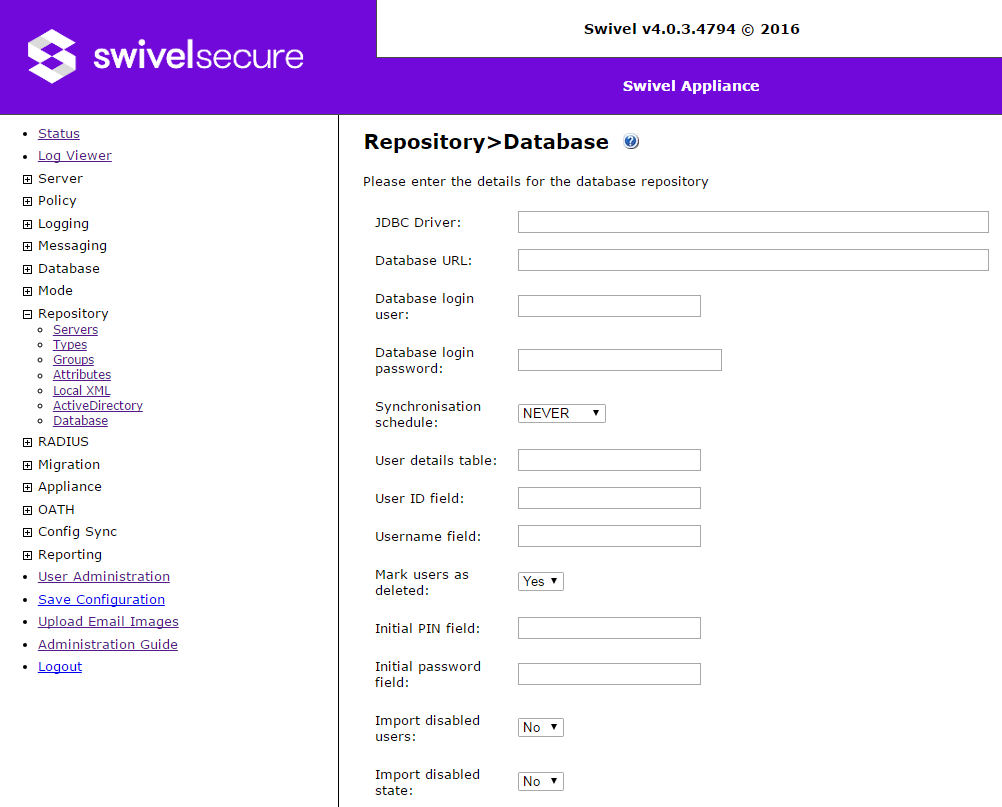 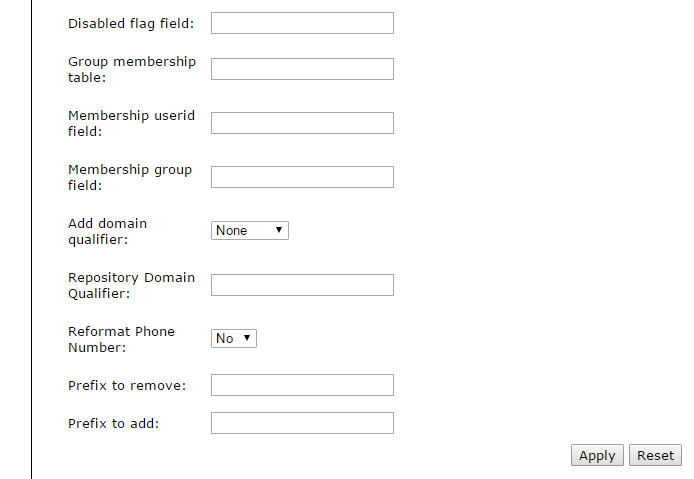 A Note on Attributes

Attributes as defined in the Attributes section for the database repository must be column names from the users table. If you do not have a single table that contains all the required information, you will need to define the users table using a View.