The AD Agent is a Swivel Remote Sync Client application that allows the synchronisation of users between the Core and a remote Active Directory (AD) server. The communication between these 2 systems is done through XML messages. To allow the exchange of messages, the Core has to have the Agent configured and the option “Can act as repository” has to be set to YES.

The AD agent reads the details from users stored in the Active Directory and sends the details of those users to the Swivel Core. In order to do this the AD Agent needs to be configured to know what data to read, where to read it from and where to send the results.

NOTE: there is a newer version of AD Agent available. The one listed here is not compatible with Sentry version 4.1.2 or higher. Please contact Swivel Secure support for details of this.

The installer for the AD Agent can be found here. The zip file contains 2 files:

The latter file is only required if you have already installed an earlier version of the AD Agent. The configuration is deleted on update, so this batch file will take a backup of them before running the installer, and will subsequently restore the saved configuration. If you do not have a previously-installed AD Agent, you can simply run AD Agent Installer.exe directly.

The installer will install the AD Agent and all other required software. To see to see how the installer operates refer to this video

Generally you can accept all the defaults, the only exception to this would be if you are installing the AD Agent on a server that already has a service running on port 8080, in which case you need to select a different, unused port. The Agent needs to be installed on a server that can access a domain controller via LDAP and can also access the associated Swivel Core server.

The default for the AD Agent is English locale. In order to make it work with another locale there is need to copy the file “C:\Program Files\Apache Software Foundation\Tomcat 7.0\webapps\adagent\WEB-INF\classes\messages_en.properties” to “C:\Program Files\Apache Software Foundation\Tomcat 7.0\webapps\adagent\WEB-INF\classes\messages_es.properties” and restarted Tomcat.

To configure the AD Agent it is required to edit the files settings.properties and security.properties .

These 2 files will be by default on the directory <user.home>\.swivel\srsc\. If the system variable SWIVEL_HOME nor the swivelHome property in web.xml have been defined, <user.home> will be the home directory of the account the Tomcat service is running as - if it runs as Local System, which is the default, it will be the root of the C: drive. In that folder, will be the file configuration.properties. Those files will be created automatically when the application is launched the first time. The DB will be on $user.home/.swivel/db

This will usually be achieved by using the configuration program (see installation) The file settings.properties is used to define the connection to the Swivel Core server that the AD Agent will communicate with has the following attributes:

The file security.properties allows to define the IP restrictions. It has the following two parameters:

Access will be denied for other IPs. Default is 0.0.0.0/0 (which allows access from all IPs) If access from non-allowed IP is attempted the following screen will be displayed. 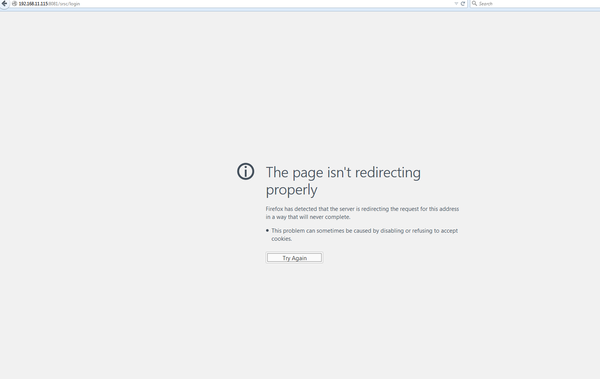 Create an Agent on the Swivel Core (port 8080), under Server Agents. The Hostname/IP should be the public or external address of the server in which the AD Agent is installed on. A Shared Secret must be set and it should match the secret which has been entered on the AD Agent installer.

Can act as Repository must be set to Yes which means the Agent will also be added as a Repository under User Administration, then under Repository drop down menu, you can select the AD Agent.

If a Domain prefix or Suffix is used, then enter this with the Username when logging into the AD Agent. 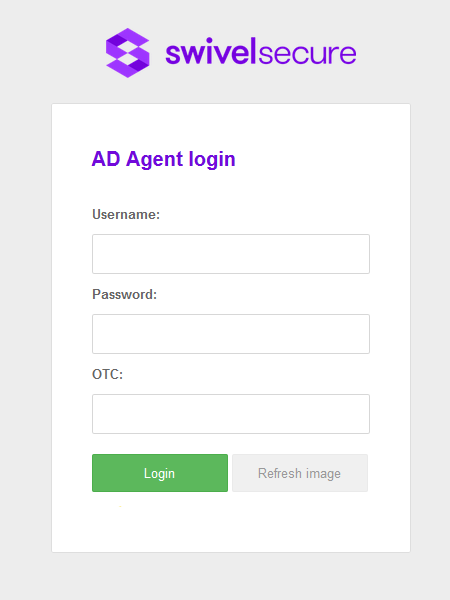 The AD Agent’s main page is the following:

This screen allows user to configure the following:

URL check password
Indicates the URL where the AD Agent is listening for requests to check password. This value will be sent to the Core so it knows to where to forward request to check AD passwords.

A main purpose of the AD Agent is to read user data from a local Active Directory server and forward that information. To do this the AD Agent needs to be configured to read the correct information from the required AD server. 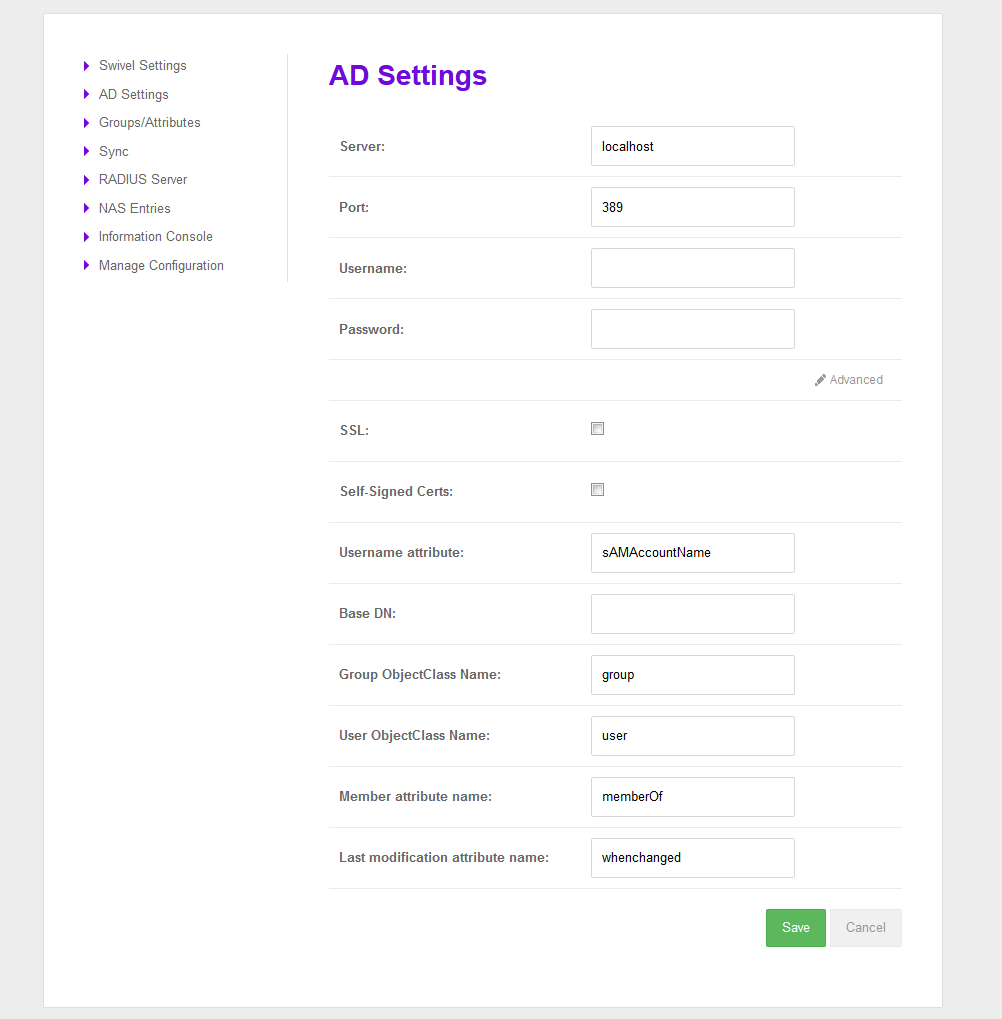 This screen requires the following information to be added.

Server
IP/Hostname where the AD is running.

Port
Port to use to connect to AD

Username
AD’s account username. This is the account used to read data from AD. Needs adequate read rights. Service accounts can be used

SSL
Checked if the connection is SSL, unchecked otherwise.

Self-Signed Certs
If checked indicates that in a SSL connection self-signed certs are accepted.

Base DN
Indicate the BaseDN, if empty will be root.

NOTE: Currently AD Agent gets only non-disabled users, and to do that a rule has been added: “!UserAccountControl:1.2.840.113556.1.4.803:2” this rule works for AD and it is something not configurable by the user in the application. This rule maybe is different for an OpenLDAP. So currently AD Agent is only known to work with AD.

If Swivel Settings are not configured and the user clicks ‘Get Config’ button an error message will be shown. Otherwise, attributes and groups will be loaded 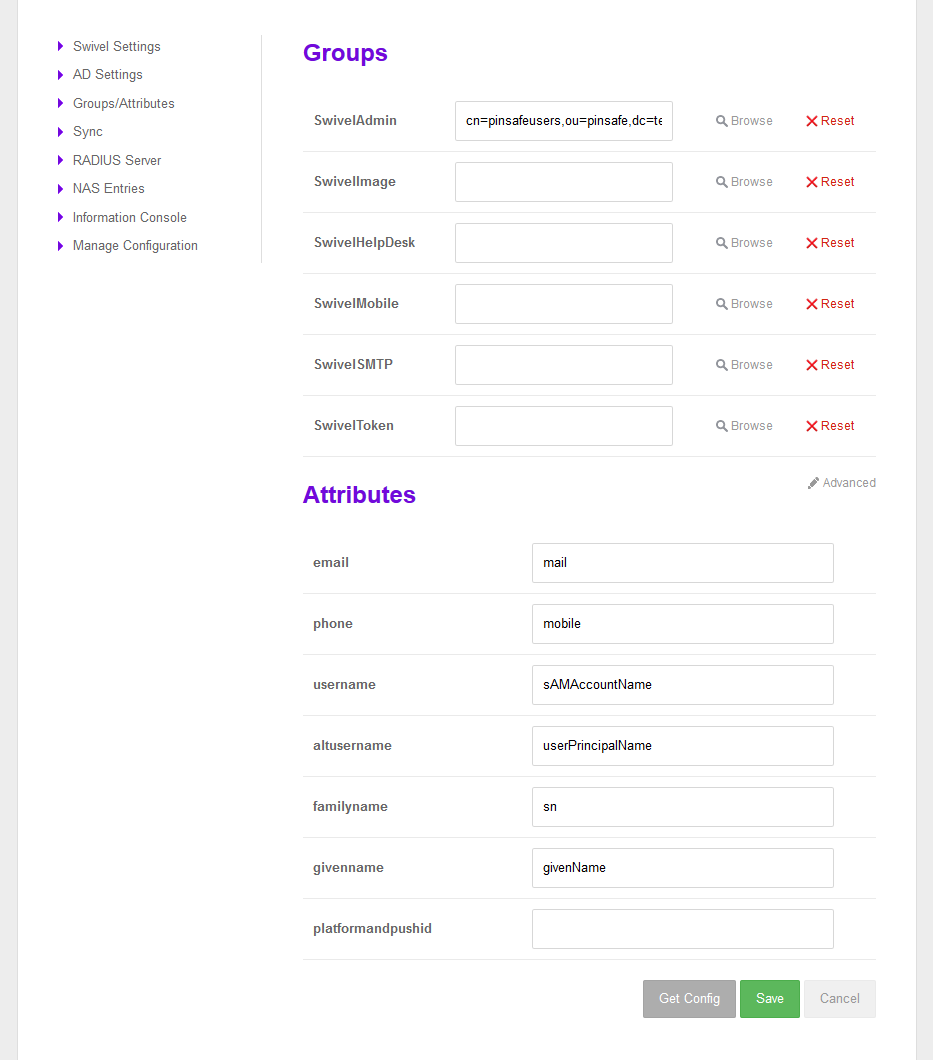 The groups on the core can then be mapped to the groups within the AD by using the browse version to find and select the group within AD. Groups appear in the first section, next to them 2 buttons appear, “Browse” to assign an AD and “Reset” to delete the current value. 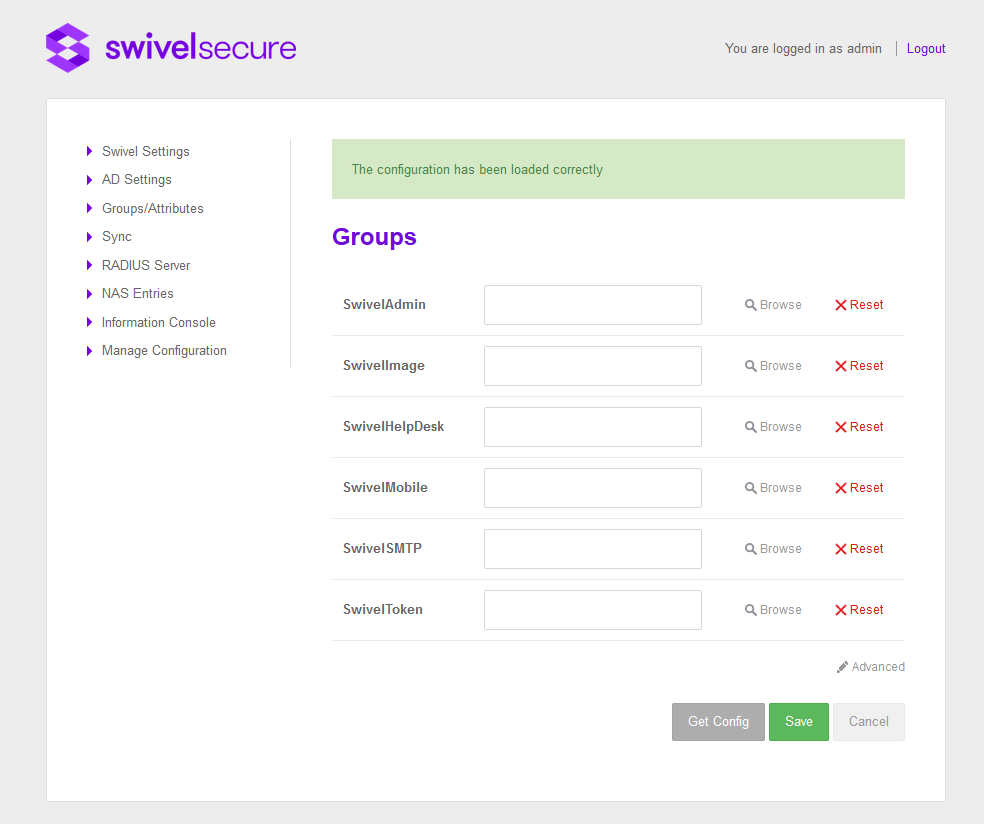 The “Browser” screen shows the current AD Path, the name of the group that the user wants to assign a value on and a list of Groups and Subcontainers of the current path. 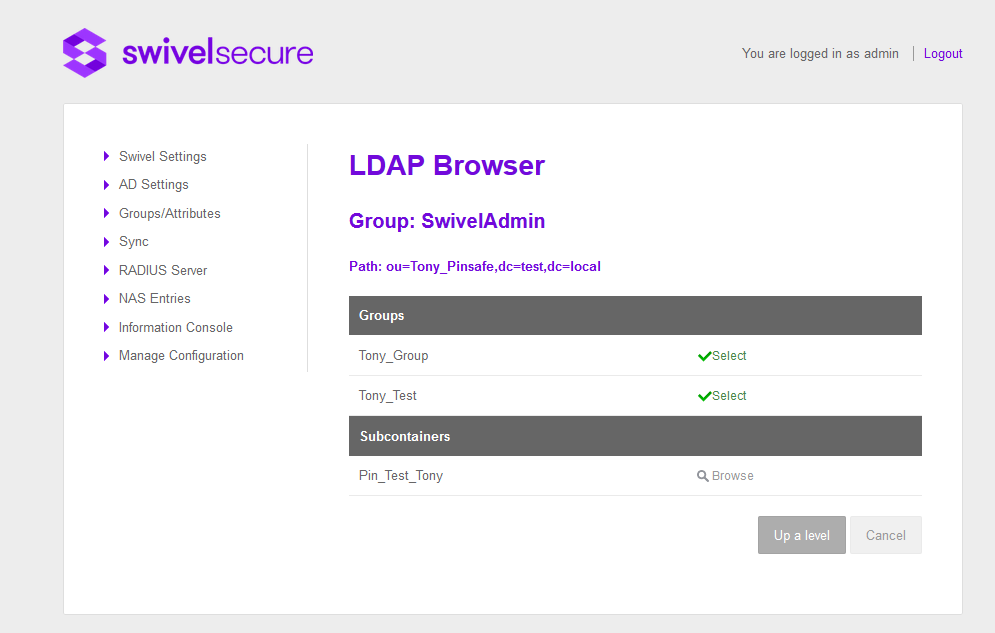 When an AD group is selected automatically is assigned to the group. 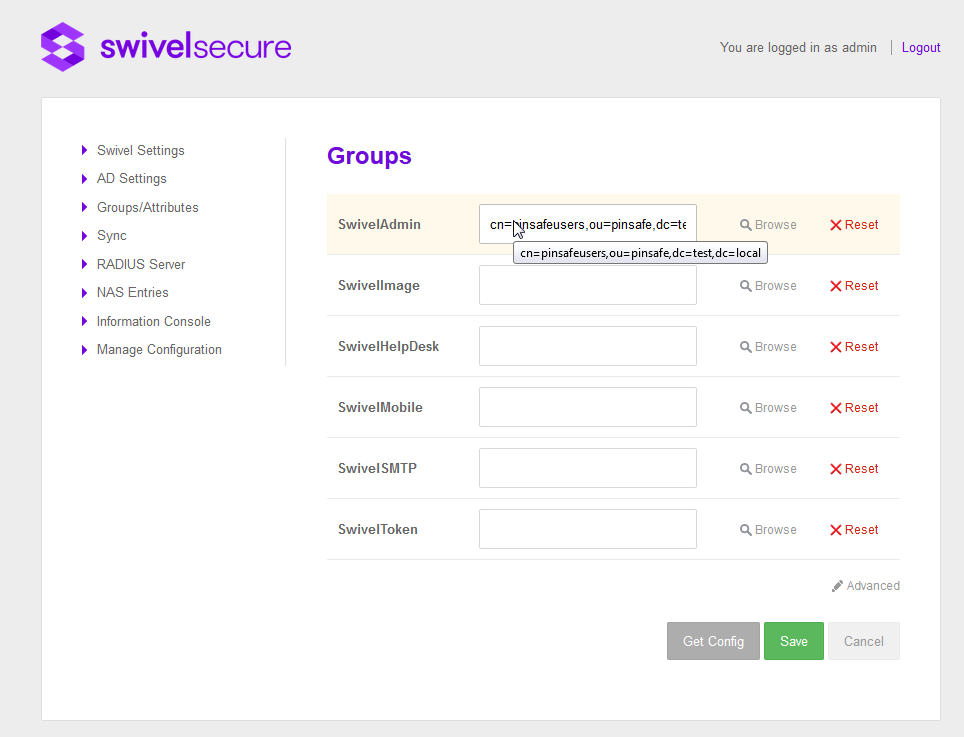 The same thing can then be performed for mapping the attributes.

IMPORTANT: To save all the changes done in that screen “Save” button has to be clicked. 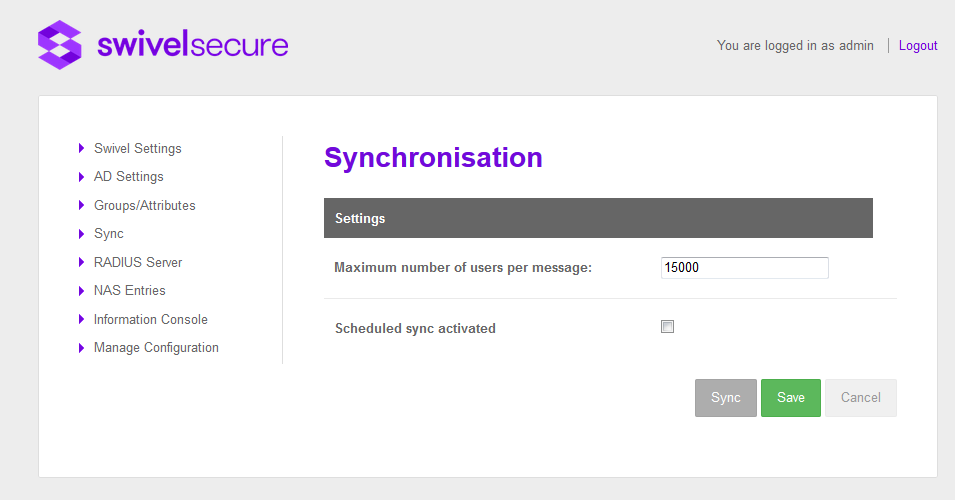 When a synchronisation is started the AD Agent contacts the core and if all is ok compares the last sync time with the last modified time on AD and if changes are required, sends the new users details to the core. 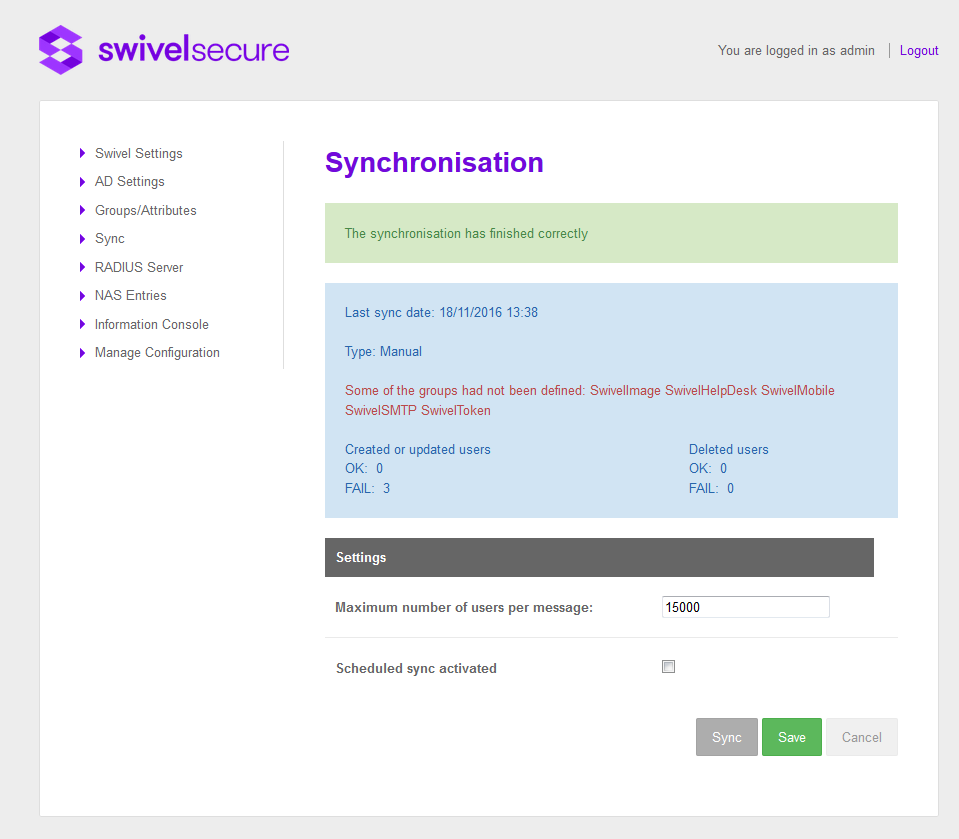 In this screen also appears information about the last synchronization (Manual or Scheduled). The information is the following:

Created or updated users
number of successes, number of failures

When a user has been synced with the Core, the next synchronization will not be update that user again unless:

NOTE: clocks of AD server and the AD Agent need to be synchronized. 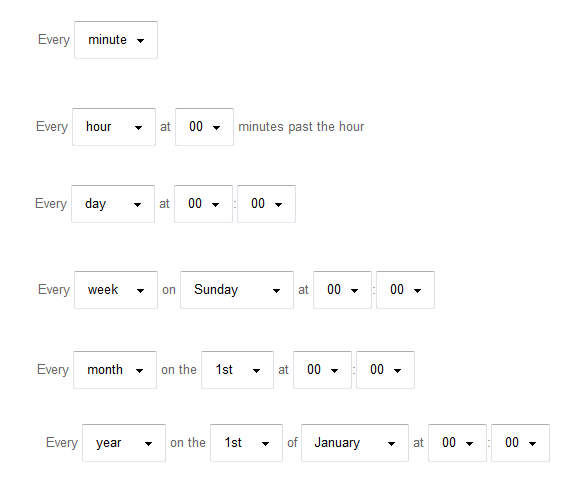 This action allows to the user resync all the users independently of they were synced before or not.

NOTE: If the rights of the groups are changed in the Core those changes are not communicate to the AD Agent and the users won’t be updated. The next AD Agent synchronization won’t update the users of those groups if the data on the AD for that users has not be modified. In that case the manual sync action has to be done to update the rights.

This screen shows the information about the messages exchanged between Swivel Core and AD Agent. The messages can be deleted automatically thanks to a schedule job that will be executed every day at 19:00.

That configuration could be changed in the file distpatcher-servlet.xml if it was needed.

The user can customize the deletion indicating the number of days that the info message has to have to be considered old and the next execution of the job it will be deleted. If the number the days is less than 0 all the messages will be deleted. 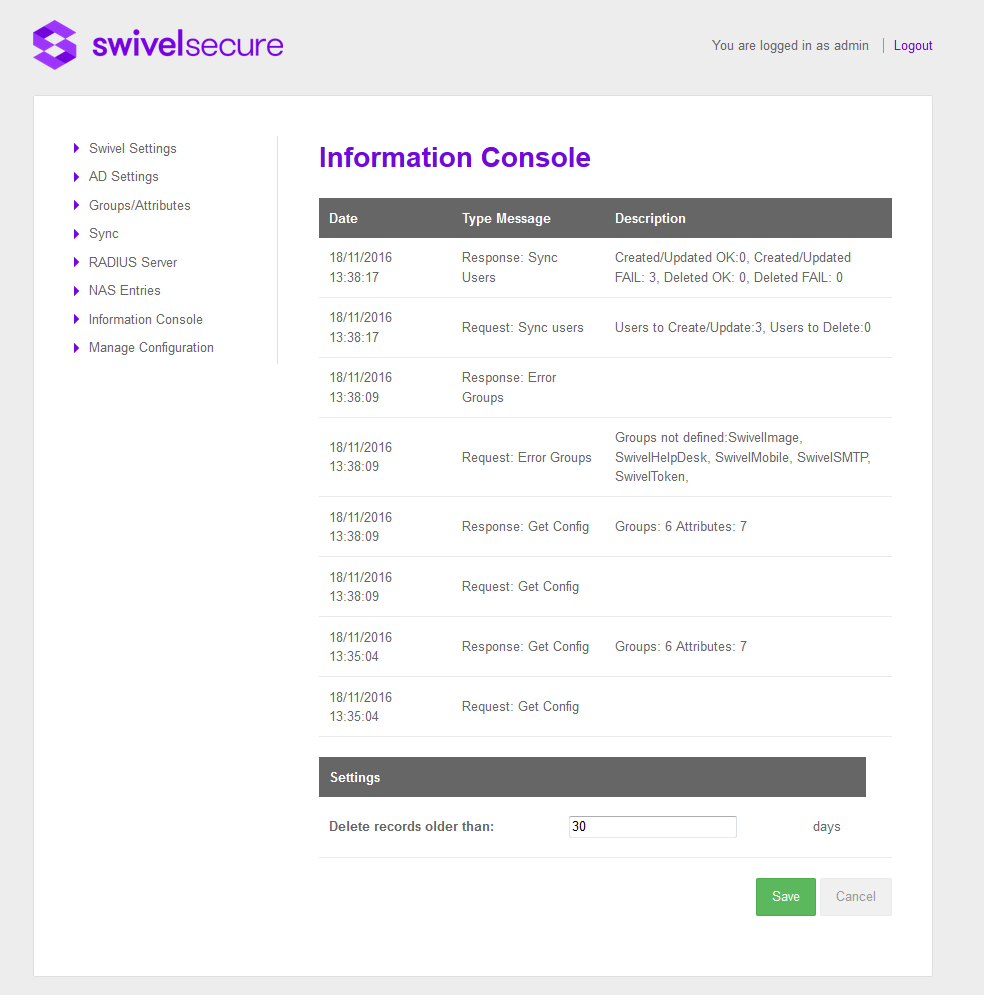 Number of days 1 would mean the messages previous to the current day will be deleted.

The application allows download the current configuration or upload a configuration previously stored. This allows for configurations to be copied across multiple installations or for when an AD Agent is moved from one server to another. The configuration exported contains the following: 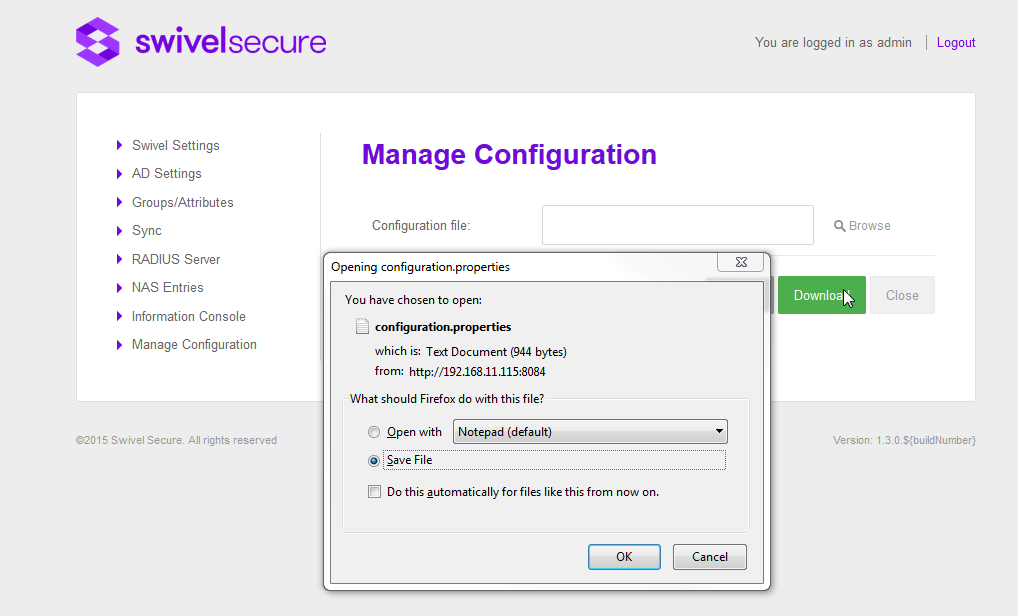 The contents of the confgiuration will looks something like

As we can see in the previous example, password is stored encrypted

After that, the configuration file name is shown on the screen and then it should be clicked “Upload” to load the file configuration. After clicking that button an information message will be shown.

In the Swivel Settings screen there is a field to indicate the URL of AD Agent that is listening requests. This parameter is sent in the “Get Config” message to the Core, and is saved as information of the Agent.

NOTE: if this value is changed directly in the Core when a synchronisation is done or a get config message is sent, it will be changed again with the value sent by AD Agent. That URL is used by the Core to check the password of the users created through this Agent ONLY if the Agent XML or RADIUS has been configured as “Check password with repository”

The messages exchanged between AD Agent and Core are XML messages. All those messages can be encrypted/decrypted if the encryption key is not empty. This encryption key can be defined in the AD Agent, on the Swivel Settings screen, and in the Core, in the correspondent Agent. Both systems have to have the same value. This value will be used as a key to encrypt/decrypt the messages.

NOTE: if there are 2 agents defined with the IP of AD Agent the encryption cannot be used. That is because if the message is encrypted the core only has the IP to identify the Agent so if there are more than one Agent on that IP they cannot be distinguished

The AD Agent can also act as a RADIUS server. (Currently PAP only) It can receive RADIUS requests from a VPN and forward the submitted credentials to the Swivel Core server for validation. The authentication requests will be sent to the same agent setting on the RADIUS core as used for account synchronisation, therefore any policies, eg Check Password With Repository, must be set as required on the core.

The RADIUS server is enabled and configured on the RADIUS screen. 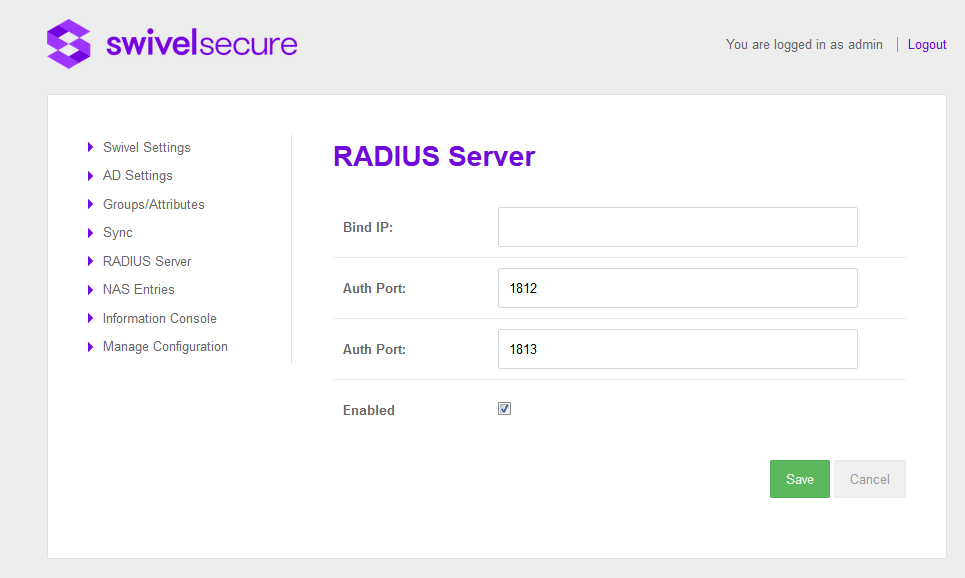 If you change any of these settings the RADIUS server will be restarted.

In order to use the AD Agent to authenticate VPN users, you must enter the details of the VPN as a Network Access Server (NA)S on the AD Agent. You need to specify the IP address of the NAS and the shared secret. 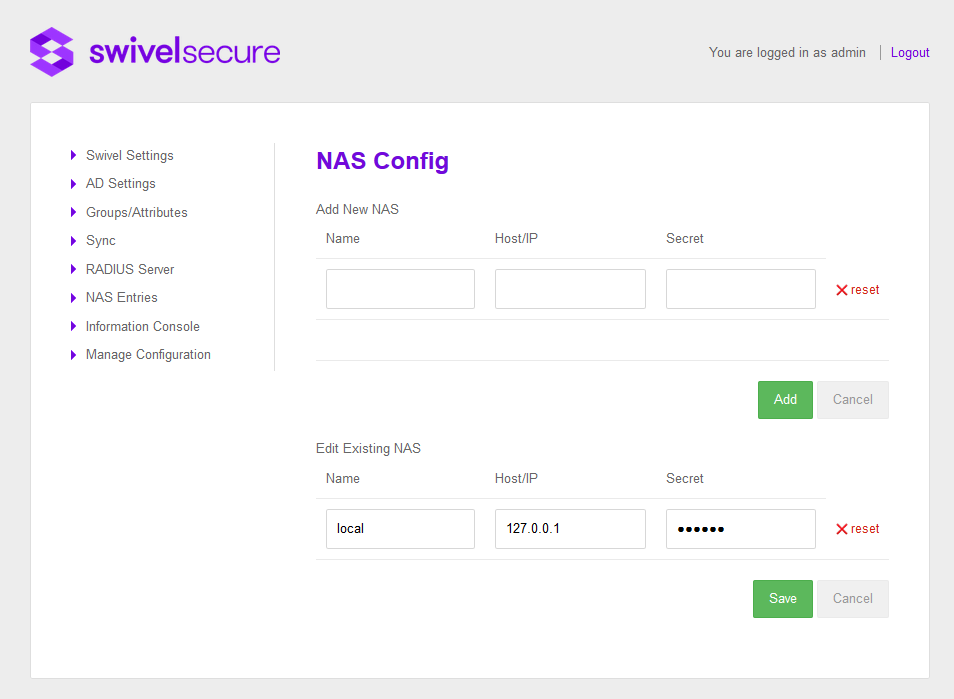 If you specify a NAS buy a hostname, the AD Agent must be able to resolve that hostname to a valid IP address. This means it must have access to DNS

Once a NAS has been added in can make RADIUS authentication requests to the AD Agent.

The AD Agent extracts the submitted credentials from the inbound RADIUS requests and passed them to the Swivel Core server for validation.